Hidden beneath the surface there’s another layer to the world. Supernatural creatures roam the shadows, living among and integrating into society as humankind expands into every corner they used to have to themselves. It was only a matter of time, then, before they found their way into our hospitals.

The Eldritch Care Unit is a medical program that runs alongside the mundane hospitals and medical centers throughout the country. You play those doctors, nurses, occultists, and other staff members that seek to do whatever they can to cure the supernaturally sick population, despite the difficulties of incomprehensive insurance, short-staffing, and lack of funding.

It’s not easy to do this job. But you swore an Oath.

Eldritch Care Unit is a unique RPG taking place in the hidden supernatural wing that's present in hospitals across the United States, wherein players take on the roles of overworked doctors, nurses, ritualists, researchers, and other staff members, doing their absolute best to provide the care they can to the patients that come in. Said patients are inherently supernatural by nature or affliction, and so these rare specialists are the only ones who have a hope of fixing them up.

ECU is also San Jenaro Co-op Approved, guaranteeing that it was produced in fair conditions by forward-thinking people!

In order to download this RPG you must purchase it at or above the minimum price of $7.99 USD. You will get access to the following files:

Support this RPG at or above a special price point to receive something exclusive.

If you're having trouble justifying the expense for ECU due to economic hardship or other issues, see if there's a community copy available!

Please only take one if you can't afford it!

ECU is an rpg about a dedicated team of doctors and medical staff who work to treat supernatural ailments---or supernatural beings with regular ailments---while fighting against the limitations of their program's budget and their hospital's bureaucracy.

The PDF is 61 pages, with a pulpy but extremely pro layout, and a few black and white pictures and graphics.

Mechanically, ECU has a good-feeling crunch, but it's not super numbers-y.  It's tight without being minimalist. Characters feel complex, but it only takes a few minutes to make them. Whether you're used to high-complexity or extremely streamlined mechanics, I think you'll enjoy the way ECU plays.

Also, the core resolution system is cool as heck.

Essentially, in a standard game of ECU, players don't roll against DCs. Player skills are static numbers. Obstacles have static difficulty numbers. If the player skill is higher than the obstacle, they succeed. If there's factors working against the player, they add dice to the obstacle, which boosts its DC.

This means if there aren't forces actively opposing you, you simply succeed at checks related to your primary skills, even if they're difficult. There's no temptation for the dice to even come out. Competence is assumed.

On top of this, players can always turn a failure into a complicated success. If there's something you're determined to do, even if the dice don't go the right way, you can flip the bird to future-you, let the consequences unfold, and succeed anyway.

I'm tempted to go on, but the last mechanical beat I want to hit is that the game has a system for presenting the players with final bosses that they can fight for an entire adventure, chipping away at it with skill checks. This is maybe the most lowkey brilliant bit of design I've seen in years. In a medical game, this allows you to make a final boss like "the patient's insurance company is denying them access to care" or "a half-real castle in Greenland has put a hex on the patient and re-applies it every time the curse is removed," and it allows you to have adventures where the PCs have to solve a multi-part puzzle in order to weaken the boss, rather than just all stacking up on a single skillcheck and heal-hadoukening the patient into orbit.

To talk about the story for a moment, there's also a fair bit of backstory going on it ECU. The setting is world-of-darkness-y, but with the caveat that while the supernatural is nominally hidden, bureaucratic organizations have been interacting with it since forever, and so there's lawyers and doctors for the occult.

The book includes a really solid overview of the historical progression from ancient to modern medicine, although ECU's setting is pretty US-focused. It could definitely be played elsewhere, but a little modification might be needed to adapt it to the nuances of your local healthcare system.

Overall, if you like House or Trauma Team, or really anything in the Trauma Center series, or if you've ever wanted to play a medical rpg but aren't really sure what would make that fun, you need to grab a copy of ECU.

-The Supernatural Quirks are a big part of what makes characters feel unique, and there aren't a lot of examples for them in the book. This forces ECU to rely a bit on the GM being comfortable with homebrewing, and might make it hard for some GMs to pick up the game. If there aren't a lot of quirks in the book because of design constraints or time constraints or the like, I'd be happy to put together a small pack of them if that'd be helpful.

-The Eldritch Oath is *really* hard to read. Zooming in makes it possible, but still not easy.

Thanks for the praise and input! The quirks I did indeed intend to be easily homebrewable, but you make a good point. I'll see about releasing a freebie on my patreon or something with a handful of new ones for people to work from.

As for the Oath, I'll take a look over that. Redoing layout would be hard at this point but I'll see if there's anything that can be done.

what is the recommended player count for this game?

2-3 is what I playtested with. But solo or larger groups should be doable.

isn't the symbol used here a part of the hypocritical oath?

Yep! At least, the majority of it is that, yeah.

In page 51, your comment remains. Other than that, looks pretty fun, I wish I had friends to play this with. I still enjoyed reading through it all, it was pretty invoking my imagination.

Thanks for pointing that out. I'll have to do an update in the near future that both accounts for the comment and removes it from the PDF 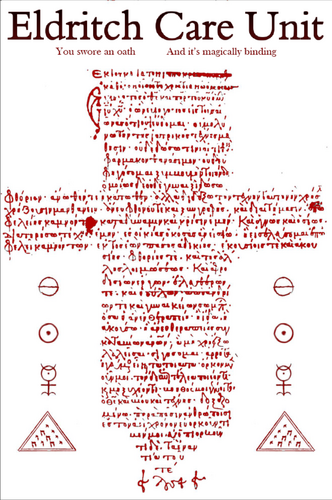